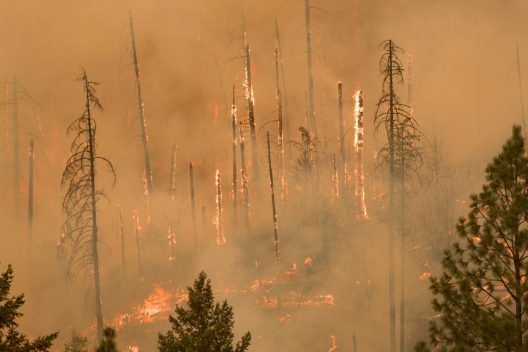 UW School of Environmental and Forest Sciences assistant professor Brian J. Harvey has been busy these last few weeks. In addition to starting a new quarter, Harvey has spoken with numerous media outlets about the wildfires currently burning, how climate change is connected and how the land recovers after a blaze.

“The ignition source of wildfires, whether lightning or human-caused, has ‘been around for millennia,’ Brian Harvey, professor of fire and forest ecology at the University of Washington, told ABC News.

“When you add a wind event on top of that, it then kicks the fires into high gear, allowing the fire to spread rapidly into communities, Harvey said.

‘As the climate warms, the potential for those ingredients for fire to align with one another are increasing,’ he added.

Harvey also spoke with Science magazine about how tree and animal species adjust to wildfires. In the story, he talks about how many of the forests we enjoy today in the Pacific Northwest were born of past fires, and that many of the species here evolved to survive fires.

“One big question facing researchers is how burned forests will recover, ‘now that the postfire climate is likely to be warmer and drier than when the parent trees established long ago,’” Harvey told the outlet.